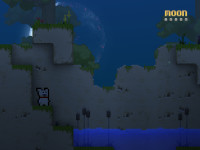 Suddenly, a new version of Moon appears. By the time I’d released the last version of Moon I was reasonably happy that all the significant technology code was written, that there would be only minor changes to code and that I’d be spending most of my time making new levels and interfaces and adding music and more audio. I was very, very wrong. I went into a lot more detail about some of the most significant changes in a previous post if you’re interested. In short, there’s cloud save support, new game mechanics, new puzzles and music. Oh and probably a few new bugs. As ever this is still a preview of the game, you’ll get a few snippets of the story and a few puzzles to beat but it’ll be a while yet before the whole thing is done. There are definitely still some knobbly bugs in there but in general things should be mostly stable and crash free. Please let me know if you have any trouble (or suggestions / annoyances) Download

Some areas in Moon are stranger than others so I wanted to create some music to convey that strangeness. Nothing so odd that it’s annoying but odd enough to feel other worldly. Also, I’ve not really played much with pentatonic scales so I thought I’d experiment a little in that direction too

The results are suitably odd with out being too discordant but I think the whole track could do with being at least twice as long. It feels a little like it just getting started and the it comes to an end so there might be some updates in the near future I think.

Before I release the next version of Moon I want to create about three or four music tracks for the various areas that are currently present. I think if I can enhance the feel and mood of the observatory, the caves and the hidden areas I’ll be very happy.

This track is my first attempt at something for the caves. I’m pleased with lots of things about it (especially the ‘drip’ notes) but over all I’m not sure if it’s right. At the moment it feels too much like the sound track for a random RPG not Moon. It might be easier if I just let it sit here for a while and come back to it with fresh ears. Anyway, please let me knoiw what you think.

It seems that my new enthusiasm for music creation is having some effect. Having completed the previous track I went straight into another one.

This one is much lighter and has a lot more of the mystery I was looking for. Obviously I’m still learning so it’s not as polished as I’d like but I think it’s an improvement none the less. Once I start to feel a little more happy and comfortable about the creative processes I’m using to drive my composition I might make a post about it.

Since I began occasionally fumbling around in various bits of music production software about 14 years ago I’ve used samples almost exclusively. Occasionally I’d throw in a half a dozen notes or a pad sweep from a synth but these occasions were exceptions to the norm.

The main reason for this has really come down to my lack of knowledge of the language of music itself. I’ve got reasonably good at knowing when I like something and even if it’ll work with everything else in my track, but I’ve never really known why; At least not at a fundamental note by note level. I can’t actually play any instruments and have never read music so this is not all that surprising.

Some time ago this lack of understanding began to bother me. The rate at which I poked at my music software dwindled to almost nothing. I’ve made one track I actually like in the past 3 years. I just wasn’t getting what I wanted anymore. So I stopped.

Then I did something better; I started reading.

Three weeks ago, I spent some money and updated my music software. This meant I’d have to justify to myself the expense and put it to some use. I also bought a book on music theory to supplement all the reading I was doing on the subject across the internet that had lead me to upgrading in the first place. Plus I need music for Moon and it’s not going to create itself.

Suddenly, in the space of two weeks I’d produced more than 16 bits of music that I didn’t hate; Each one constructed without samples from individual notes up. Each one based on some actually musical theory. They’re more like crude sketches than anything I’d put on here but the important thing is that I actually produced something I liked. Possibly for the first time in years.

Anyway, This last week has been spent putting together something that might end up in Moon, assuming I don’t fall out with it. To people that are more skill in these things than me it may seem simplistic (I still think the mix of each of it’s elements is a bit rough) but it’s made without the samples I’ve relied on for years. I think that in itself is worthy of putting it up here.