Who doesn’t love pirates? I imagine the number has dropped a little since they now seem to be everywhere. I liked them before they were cool *put on hipster glasses*

For many years I provided the games and puzzles (and a lot of nonsense) for a pirate themed gathering amongst 40-50 of my friends. I recently rediscovered the lost image files for most of the puzzles that featured in each one and thought it would be fun to share them with the wider world (not that my website readership is all that wide).

First off is thise one from 2007. The aim was to work out the numeric combinations of three tumbler locks that were all attached to a single chest. 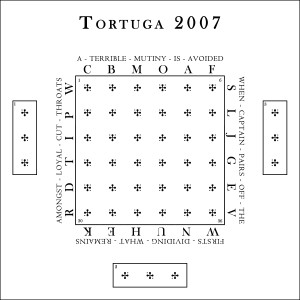 This is a reasonably tricky puzzle. Sadly I fell a bit flat when one of the (far too cheap) locks seized up on the day and the hinges of the chest had to be removed for the treasure to finally be won

I still have the chest; and it still has a broken lock attached to it.