A little while ago I started to realise that Dr Dog was not going to be the final main character for Moon. He’s endearing in many ways and as one of the first assets I created for the project is a very hard thing to decide to change. However, from a game design and story point of view he’s creates several issues that really aren’t going to change unless he is replaced. 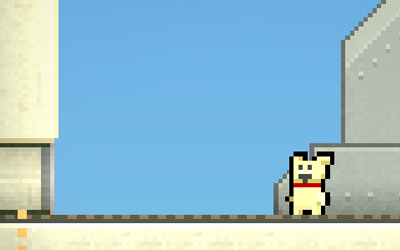 In the Image on the left you can see Dr Dog standing in his Idle pose. He stands like this anytime you’re not moving. As you can see he’s not one for wearing a lot of clothes and he likes to stand very upright. He’s also about 14 ‘pixels’ high. My original decision to just give him a collar quickly made my life tricky when it came to drawing any other characters (for you to interact with). Because He’s not wearing clothes they should all do the same, to keep the world consistent. This means my only real choices for deferentiating one character from another is in type of animal, fur/skin colour, choice of hat and perhaps with a prop (like a hand tool). This whole problem was only made more tricky by the choice to use a 16 by 16 ‘pixel’ tile size for everything. It’s very hard to draw a convincing and identifiable goat, rabbit or pig in 14 by 11 pixels. Not impossible, just really really hard.

Next, is his shape. He has a very straight profile. As you can see along his left edge there’s just a single little pixel sticking out to represent his other arm, and without that he’d be straight along one edge from head to toe. The more I saw this, the more I wanted to change it. So in short, he had to go. 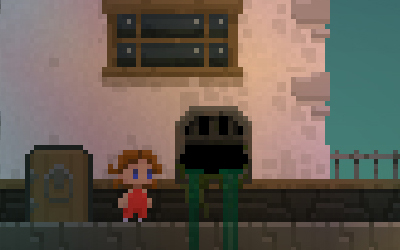 This is Alice. She’s 15 ‘pixels’ high when standing idle and she looks like she wants to go places even when stood still. She also likes wearing clothes, doing science and exploring. As you can see her profile is much more interesting.

Straight away things got better.It’s much easier to make other charatcers that have some personality when you can dress them up.

I also extended the character sprite system to allow the characters to extend outside the bounds of the 16×16 sprite borders. This means that animations can be a more dynamic and if for some reason I want someone to wear a huge hat I can.