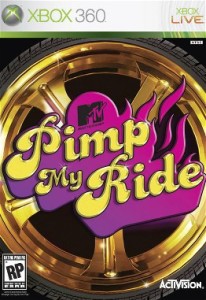 When I first heard that we’d be making a game for Pimp My Ride my first reaction was “How?”. Its a little hard to see where a set of game mechanics can be attached to the format of the show. Luckily it wasn’t a problem I had to deal with. Instead I was charged again with the creation of all the real-time effects and this time I had a little help, i.e. I’d gone from a team of one to a team of two.

The final result looks pretty enough on all its release platforms (especially the Xbox 360). Though a little short (very short) on depth. As far as procedural effects go, it features everything from fire hydrants and collision sparks to flocks of birds and scatterings of rubbish and leaves.